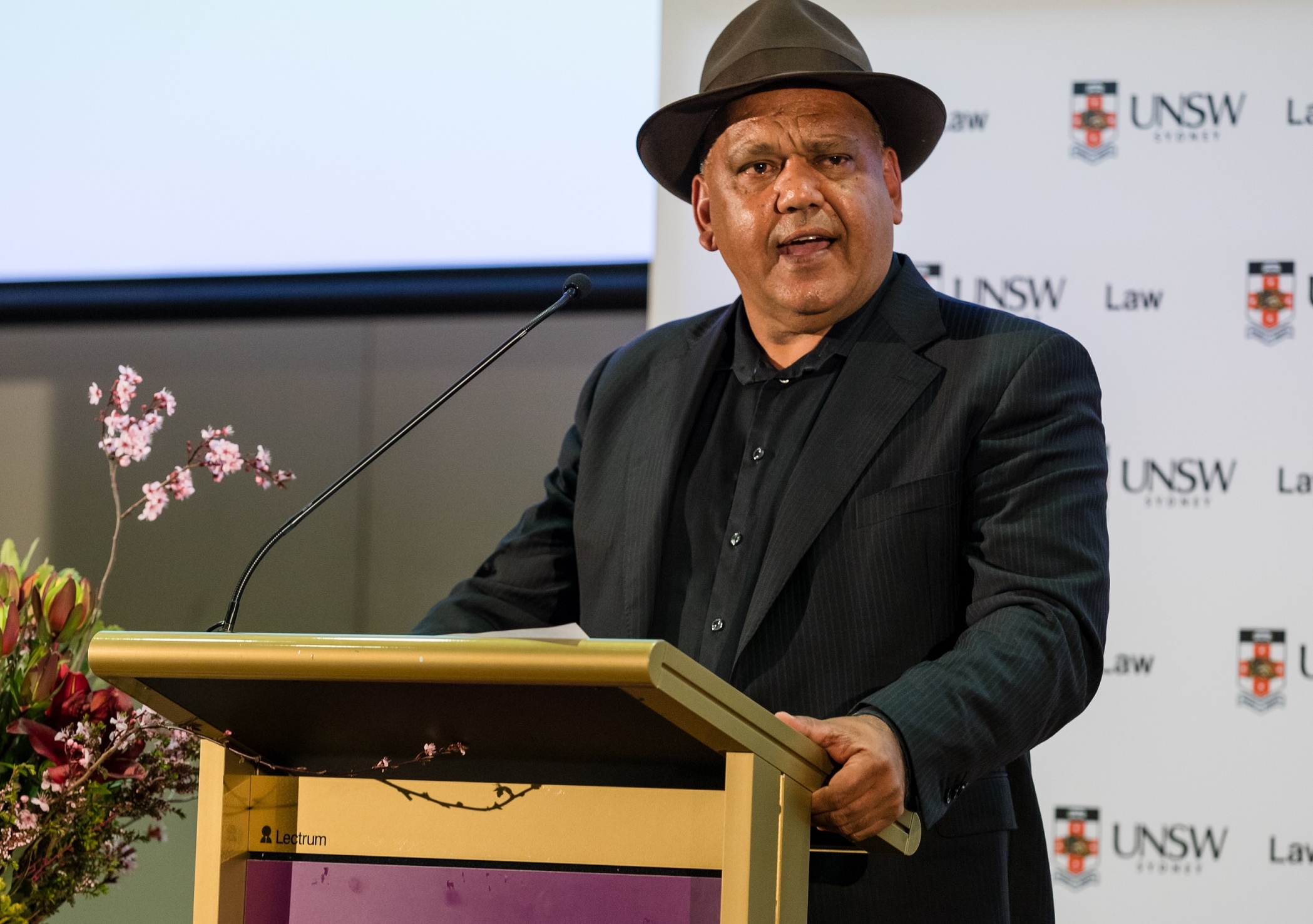 Noel Pearson delivered an optimistic “Declaration to Australia”, along with a series of “uncomfortable but necessary truths”, to a packed theatre at UNSW Sydney during this year’s Hal Wootten Lecture.

Noel Pearson delivered an optimistic “Declaration to Australia”, along with a series of “uncomfortable but necessary truths”, to a packed theatre at UNSW Sydney during this year’s Hal Wootten Lecture.

In an impassioned speech, the lawyer and Founder and Director of Strategy of the Cape York Partnership declared that despite “our setbacks, we have to look forward and keep our eyes on the prize, for we have a world to gain”.

He challenged the notion that progressive politics with its reliance on “handouts” was effective in building socio-economic equality.

His proposed declaration put words to a unified vision of Australia that threaded together the nation’s Indigenous, white colonial and multicultural immigrant heritage for the first time, providing an unexpected contrast

to his characteristic serving of tough love.

Intended to accompany an Indigenous voice in parliament, it recognised Australian history as “replete with shame and pride, failure and achievement, fear and love, conflict and comity, mistake and brilliance, folly and glory.”

Yet it sought “with earnest and open hearts and strong desire to fill the lacuna, after more than two centuries, [to] make this declaration of Australia and the Australian People, to see our reflection in each other”.

Pearson warned that the belief that White Australia would “lose” through just settlement and reconciliation was a “recipe for prolonging this torment of powerlessness for another 200 years”.

He championed pragmatism and self-determination driven by a sense of responsibility over “radical chic” (activism via social media) and the gesture politics of Reconciliation Action Plans, concession treaties and Kevin Rudd’s Apology without reparation.

He advocated the pursuit of self-interest as a major driver of progress – “the engine of change is the magnesium flame of desire”.

Rather than focusing on charity and handouts, greater socio-economic equality was achieved when “mum and dad clutch their children to their breasts, motivated by their own self-interest, to climb a few rungs to put themselves in a better position”, he said.

“Social justice is merely the sum total of a whole lot of individual progress. And of course, we need large redistribution to build capabilities to provide opportunity,” he said.

“But we get the whole question of justice wrong if we predicate all of that on the basis of charity and handout, rather than motivating the natural interest of people have in pursuit of better lives.”

Pearson called out the contrast between his conservatism and the “hotbed of progressivism” he had been warned awaited him in the audience and academics within UNSW Law.

He attributed his “strong conservative instinct towards the maintenance of ritual and tradition and the importance of structures of society and family and law” to his heritage with its 60,000 years of Indigenous tradition, his mission upbringing, and his religious beliefs.

Yet he believed that seeking out “the radical centre” of conservatism, liberalism and socialism – an amalgam of traditional conservative values, the socialist belief in the need to share opportunities across society and the liberal pursuit of self-interest – held the key to progress.

It gives influential lawyers a platform to discuss their lives in the law – those who have been “a lever for change”, as Dean of UNSW Law Professor George William said – showcasing its values and principles through their own life journey.

He has also served as a member of the Expert Panel on Constitutional Recognition of Indigenous Australians and the Referendum Council.

Please find the video recording of the full lecture here.