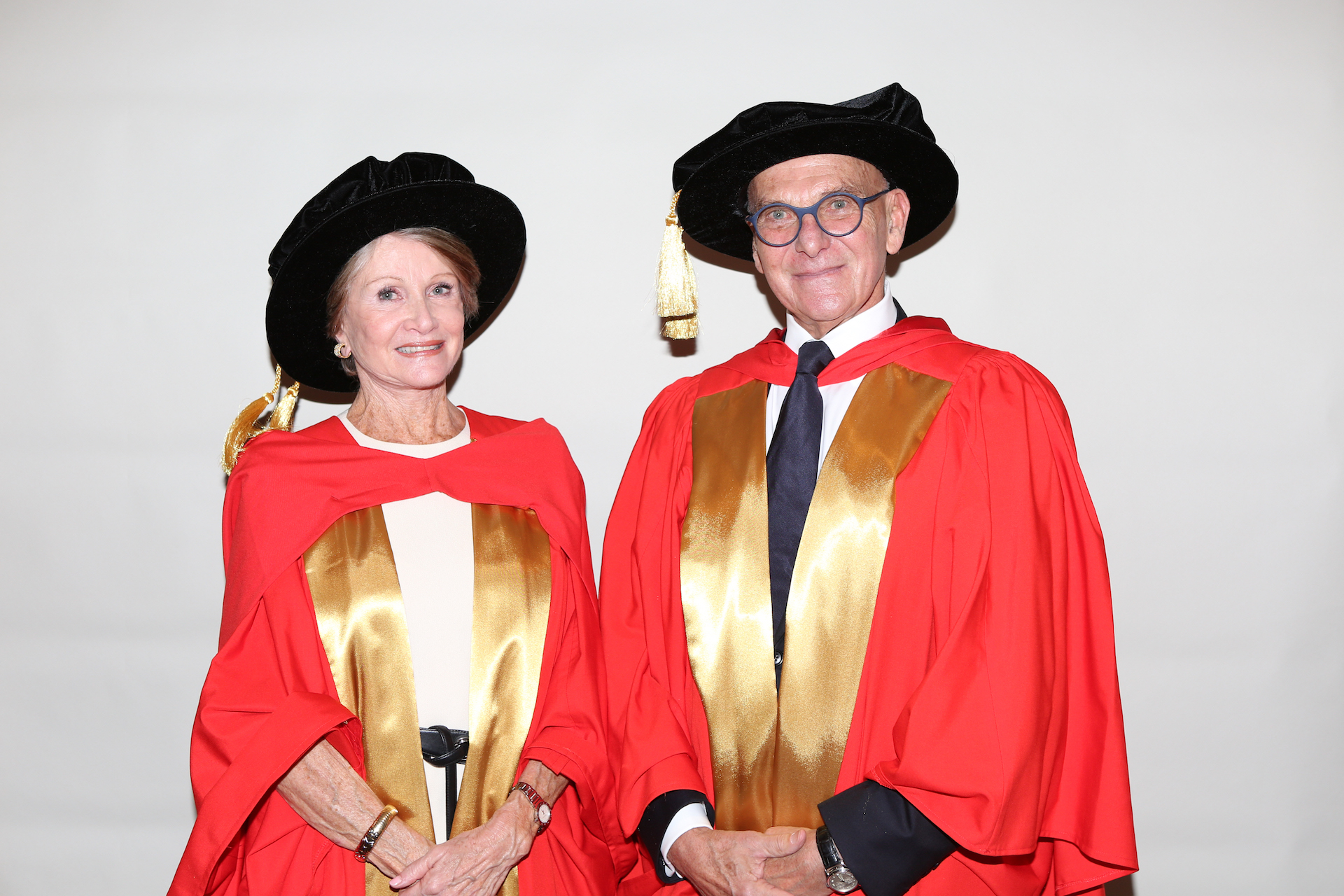 Andrew and Renata Kaldor, former refugees who have used their career success to influence refugee law and policy, have been recognised for their exceptional contribution to society.
Andrew and Renata Kaldor, former refugees who have used their career success to influence refugee law and policy, have been recognised for their exceptional contribution to society.
Accomplished business leaders Andrew Kaldor AM and Renata Kaldor AO have been awarded UNSW Sydney’s highest accolade, in recognition of their eminent service to refugee law and policy.
The Kaldors came to Australia as post-war refugee children before forging highly successful careers in business, education, philanthropy, the arts and public service.
At Tuesday’s (November 6) UNSW Law graduation ceremony, both Kaldors received Doctor of the University, honoris causa, degrees commending them as “inspirational role models for those wanting to make a difference in our society, ensuring that Australia is a place that provides hope, opportunity and dignity for all”.
As former refugees, Mr and Mrs Kaldor felt bound to speak out about refugee issues, and in 2013 they accepted UNSW’s invitation to establish the Andrew & Renata Kaldor Centre for International Refugee Law, which marks its fifth year this month.
The Kaldor Centre has quickly gained global recognition for its pioneering research and public engagement on displacement issues in Australia, the Asia-Pacific and around the world.
Survival stories
In a jointly delivered Occasional Address, Andrew and Renata Kaldor reflected on how their views today were shaped by personal experience.
Mr Kaldor detailed his family’s dramatic 1948 escape from the Soviet takeover of Hungary when he was a baby. His crying caused their people smugglers to abandon them in the woods, where they met the loaded guns of Austrian soldiers.
Mrs Kaldor’s father, who had survived Theresienstadt and Auschwitz, bribed officials for visas to leave Czechoslovakia when he realised that the new Communist government would not allow his daughters to go to university.
“[We understand] some of the things desperate refugees do to escape and find safety,” Mr Kaldor said.
“Renata and I have a family history of being drugged, threatened with death, using smugglers, bribes and false documents to get to Australia. Did those desperate steps make us unsuitable citizens?”
Mr Kaldor started his first company, Australian Stationery Industries (ASI), in 1980, serving as chairman from 1980 to 2016.
He was a long-time director of the Sydney Symphony Orchestra (SSO) and has commissioned many works by Australian composers.
Today he serves on the Advisory Committee (Australia) of Human Rights Watch and is chair of the Kaldor Centre’s Advisory Committee.
Renata Kaldor, a UNSW alumna, urged the 209 graduates to “speak up about unconscionable behaviour, whether it’s on the bus or the boardroom, or in a world context. Don’t stay silent about injustice. Be brave”.
“There will be times in your careers where you can make a difference to people’s lives. Don’t miss those opportunities. Don’t turn away, thinking somebody else can do it.
“We all need to participate in making our world a better place, and all of you have the added advantage of your education to improve not just your own lives, but the lives of those less fortunate.”
Mrs Kaldor began her career as a high school English teacher, later working in educational welfare in the UK, then chairing the NSW Women’s Advisory Council, serving on the board of the State Rail Authority, and as a Fellow of the Senate of the University of Sydney, where she was also was Deputy Chancellor.
She now is Chair of the City Recital Hall, Angel Place, and serves on the Board of the Sydney Children’s Hospitals Network and the Advisory Committee of the Kaldor Centre.
Scientia Professor George Williams AO, Dean of UNSW Law, read the citation commending Andrew and Renata Kaldor. UNSW Chancellor David Gonski AC presided over the service, presenting the Kaldors with their Honorary Doctorates.
Find out more about Kaldor Centre.
Follow the Kaldor Centre on Twitter @KaldorCentre
MENTIONS
George Williams